Back Forty Beer Company: Tapping into Foreign Distribution
Alabama’s largest craft brewery, and Manufacturer of the Year, STEPs into Exports

Hornsby Steel: Modern-Day Blacksmith Goes Global
Rolling steel into the Caribbean and beyond

To Your Health Sprouted Flour: Growing International Sales Organically
From Fitzpatrick, AL to the world

Old Iron Doors Swings Jobs Back to Alabama
A local entrepreneur uses an SBA-guaranteed loan to move a wrought-iron door manufacturing facility from Mexico to Bessemer, bringing 30 new jobs to the area and allowing the company to increase both foreign and domestic sales.

Foundry in China Gets (Environmental) Blast from Birmingham
With all the items being made in China and sold in the US, it’s refreshing to hear of a shipment going in the other direction. Such is the case with Electric Controls and Systems of Birmingham, Alabama. Learn how EC&S leveraged AITC and SBA resources to beat out a German competitor and secure a $11.8 million contract to produce a hot blast cupola system for a new foundry in China. The foundry produces grey iron for use in the production of diesel engines.
*2007 Receipient of the Governor’s Trade Excellence Award 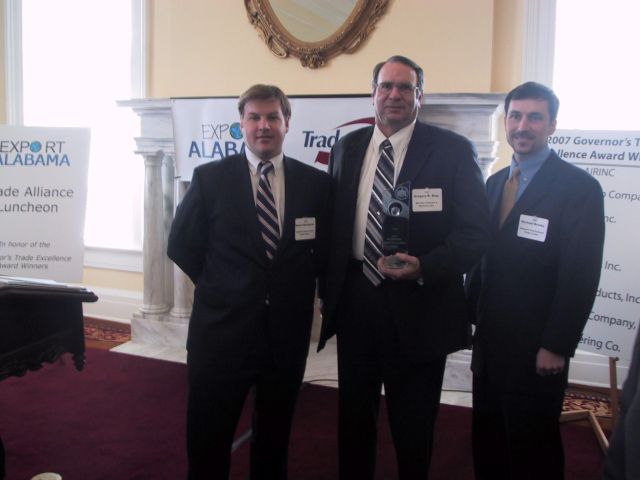 SBA Loans to Small Business Exporters Surpass $1 Billion!
The SBA Office of International Trade reported 3,302 loans for $1.03 billion to small business exporters in FY 2006, doubling the number of export loans made in FY 2003.
How many of your competitors are already using SBA programs to their advantage?
How can your company take advantage of SBA’s loan programs?
Call us for a free evaluation: 800-747-2482

Ex-Im Bank Supported Over $50 million in Alabama Exports for 2006
Over the last five years, the Export-Import Bank has supported 11 communities, 27 companies and financed a total of $311.73 million in exports from Alabama.

Bulk Storage Company Unboxes One Export Market at a Time
MSSI Inc designs and fabricates steel products that are used for feed ingredient and raw material storage. A quick trip to a trade show in Mexico allowed the company to find a represenative in Venezuela, adding to the 30+ countries that they export to.

Small Company Finds Safety in Export Markets
CEO jumps off building, lands safely in the booming Asian construction markets. Find out how he leveraged state and federal programs to tap into lucrative foreign markets when the domestic market was flat.